This is my very first BLOG entry... I hope you find it interesting.

I got this unit, an European TS-790E, in a somewhat sad condition, as you can see in the first two pictures. 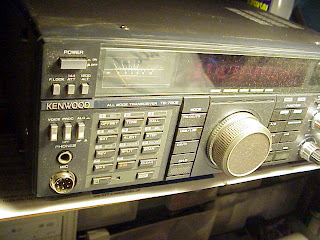 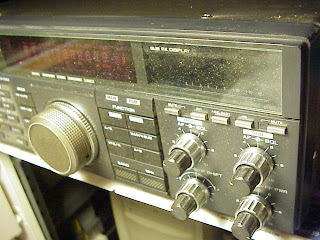 It seems packaging material was dirty and so the unit got some dirt all over it... well, anyway, I like to clean the rigs thoroughly so this was not a big problem. So I opened it and vacumm-cleaned the internals. It was not too dusty and result was good. 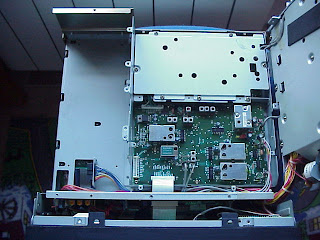 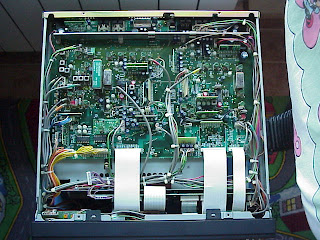 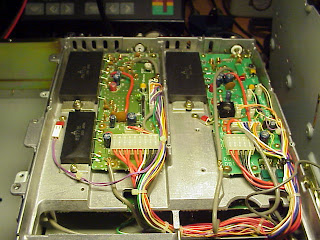 Once cleaned internally, I proceeded to clean the front panel. As there was some dust in the dial glass internal side, I decided to completely dismatle front panel, including display glass, keypad and so on. Beware if you do this: there are very tiny parts which are prone to get lost. 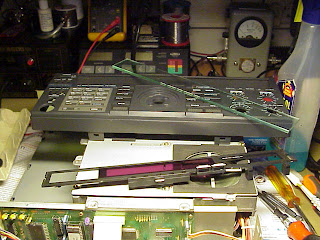 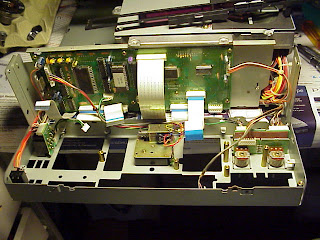 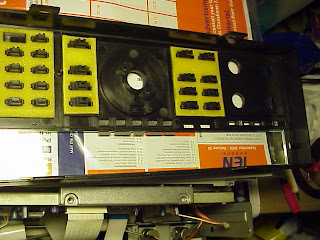 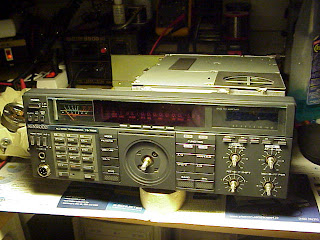 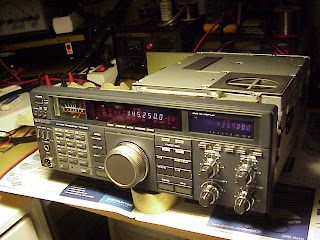 Once front panel was clean and everything was back, I did a first general check of the unit. Sensitivity was fine in both bands but I found some problems with the power output in VHF. I use a nice Rohde & Schwartz CMT-84 Communications Test Set and it measured from a maximum of about 50W to a minimum of about 33W... something was clearly at fault. So I carefully checked VHF power amplifier assembly and found that someone had resoldered the power module (probably an attempt to fix the problem). I noticed also that there was no thermal paste in the power module... nor in the dual UHF modules!. This seemed to me the same Kenwood fault that they had with some TM-241s. So I took out the complete VHF PCB. 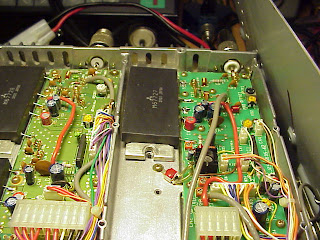 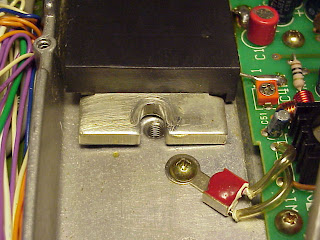 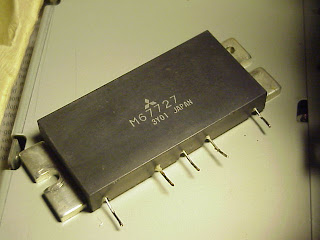 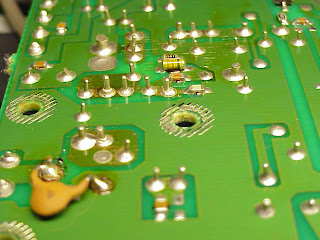 As you can see. there was no thermal paste... and several soldering points were cracked. This could explain the power output odd behaviour so I resoldered all the suspicious solder joints and added thermal paste both to the power module and to the temperature sensor. 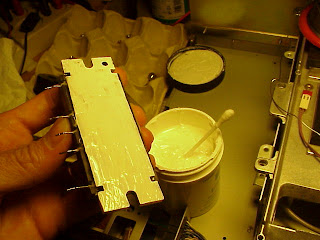 I did the same with the UHF modules (this rig uses one as a driver and another larger as final). UHF PCB had no cracked soldering joints but, just in case, I resoldered the power area. 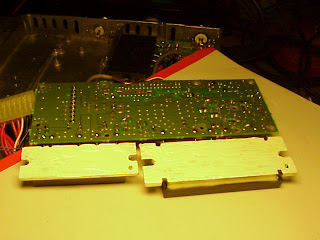 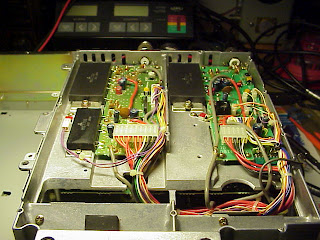 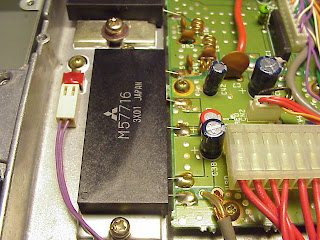 After that, I measured power again and adjusted it to 50W (VHF) and 40W (UHF). Power modules are 60W maximum so it was a safe setting. 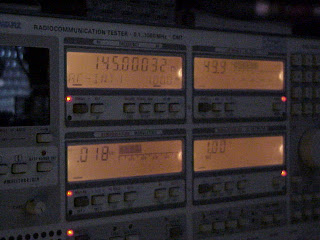 And, what is better, power output kept constant!

Only thing the rig needed to be perfect was an slight touch of the reference oscillator. Once that was done, I put back covers. 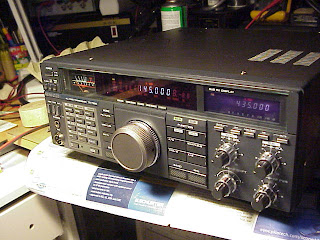 And then put the rig on its operating position. 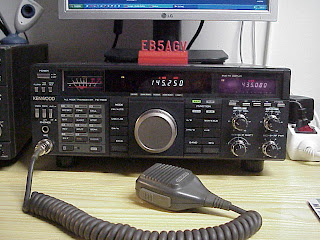 Great looking job OM. I did notice the leads of all the power modules were straight. In the future you might want to put a small amount of a bump or bend in the leads. I have found on some installs by Kenwood and Motorola a high failure rate due to the module wires being pulled loose by differing rates of thermal expansion between the heat sink and the board mounts. A small bend allows for movement of the module in relation to the PC board.

Thanks for your hint!. Well, curious thing is that UHF modules had the riginal soldering on them and they were not bent as you suggest, so it seems Kenwood did not care... which is not hard to understand looking at the lack of thermal paste :-(!!!

BTW, this rig gets very hot, even transmitting with just 20W or so (in local FM ragchew mode). Fan comes on eventually but temperature is very high when it does. I guess it is the way this model works, right?

You're genius Jose, and thanks a lot for managing amateur-repairs maillist. I really get benefits from your sites/blog. My warm greetings to Your Family & Sara. And Congratulation For Spain Soccer Team Won Euro 2008. I have wireless telecommunication related site for Everyone to visit. Welcome.

Working on a 790 this week- doesnt retain memory data when no dc is maintained- I am hoping a bad battery- wish I could see what the exact replacement battery was but will prob add a battery holder - same as you did.
Joe N2GBT

I have fixed another 790 for a friend and have also replaced the battery with a common 2032 plus holder. It will last for sure for several years and replacing it next time will be very easy.

Also be sure to clean any possible leakage residue, as it could eat the traces, as it did on my unit.

Wow ... great work, OM!! I enjoy looking at all your pages. You have taken some great photographs and made some really tough jobs "look" easy!

Hello, my name is Massimo, I have a problem with my TS-
790E not turn on.
Before failing totally gave me several times
the following symptoms: Pressing the power button is lit
after 1-2 seconds with little brightness of the display, and then
returned to normal.
I hope I can give help with this.
Thank you.
73 'Max

Even if it may sound silly, take a very close look to the power cable fuses. I have found some intermittent fuses in several rigs and they cause all kind of strange behaviour. They may look OK but when there is some current through them, they fail. So, if in doubt, replace power cable to check or, at least, replace the fuses.

If that does not help, I would check control unit, specially around and below battery. If there is any trace of leakage or battery discoloration, I would remove it, carefully clean the residue, and check all and every trace which passes close to the battery.

Thanks for the reply I have tried all you told me.
Now my TS-790 does not turn over.
After I press the power button lights up more than 20 times.
Thank's

Hello Jose
I checked the power switch, power cord, power supply and battery.
What can be causing this?
I have already removed the radio, but I have not touched anything.
I am a technician of personal computers in Palermo, Sicily.
Help me, because it was my first serious radio.
thanks

Hello Jose
I checked the power switch, power cord, power supply and battery.
What can be causing this?
I have already removed the radio, but I have not touched anything.
I am a technician of personal computers in Palermo, Sicily.
Help me, because it was my first serious radio.
thanks

Thanks for your advice on thermal compound. I've added it to all modules, and the first noticeable effect is fans starting to work sooner. Did you notice this?

I mean this is a right and good effect due to the improved heat transfer to the heathsink that makes the thermistor to start early.

I see you make reference to adding a UT-10 to your TS-790, I have just added a UT-10 to mine but am having a few problems. I am wondering if you have any ideas.

There are two problems related to my UT-10, although the second problem may in some way be related to the first.

Problem 1: I have very low maximum power output. I am only getting roughly 200mw in FM and SSB (two-tone input) when power out should be at least 10w. This leads me to believe the final power amp (a M57762) is bad, and is passing thru the 200mw input coming from the driver (a M67715). I came to this conclusion because the output of the UT-10 is supposed to be 10 watts and the spec sheet for the M57762 indicates that a 200mw input will result in a 10w output. The fact that I am getting 200mw leads me to believe the driver is functioning as intended because input to the driver should only be about 0.2mw input to achieve 200mw output. If both driver and final power modules were bad, I'd expect to see no power passed thru, or at most 0.2mw that was input to the driver. If the driver were bad and passing thru the 0.2mw to the final amp, I doubt I would see anything at all even if the final were good, as from the datasheet for the final, it looks like it needs a lot more than 0.2mw to get any measurable output. However I don't know how to test the M57762 in my UT-10 as I don't have any test equipment that gets up much above 450mc. About all I can do is shotgun this by replacing the final and see if that works. I've been pricing the M57762 and find them ranging from $20 (off-shore IC's/Hong Kong) to $100 for ones located here in the states. They appear to be in stock both places. My only concern is that once I replace the module, I have no test equipment to align it other than just attempting to adjust for peak power out. I'm about ready to gamble and just purchase a final power amp and try it.

Problem 2: While I am able to get 200mw output on FM and SSB as noted above, I can not get any output at all in CW mode. CW works fine on 144 and 432. On 1240, when you key the rig with the key, the rig switches to transmit, you can hear the sidetone, but there is no power out at all. I originally figured it was the final power amp, but that was before I tried FM and SSB and found I did have about 200mw of output. I figured if I had output on voice modes that I should have CW output as well so I'm not sure why the CW output is missing. I'm not sure if there is some unique circuit that would allow voice operation but not CW, I'm still digging thru the schematics to figure that one out.

So my question is do either of these problems sound familiar (power problem is probably straight forward, more a question of alignment/tuning after the final module is replaced if that is the problem). The lack of CW, if not related to the power output problem, is trickier to understand.

This radio has had the battery replaced with a battery holder and has no damage due to battery corrosion as you encountered.

Good mornin Jose,thanks a lot first to your experience sharing.
I have get a TS790E with Uhf stage non working.
During my inspection i have found D2 on final PCB desoldered and little burned!
It was wonrking and resoldered uhf go well but... i have noted that D2 is soldered only on a PCB face, top face and in a terminal there is not the hole and this missing hole lead to a non wiring between D2 an L2.
Have you ever senn something like this? Is for you right that i make the hole and install D2 "normally" trought PCB like Vhf mfinal PCB?
Thanks a lot in advance!

hi my ts790 will not transmit when i press the ptt the on air light will come on but the radio will remain in rx mode .. regsrd .francis

Could you please share the EEPROM firmware of your TS-790?
You seem to have one of the latest firmware versions.
My e-mail address is:
z_miklos1 (at) yahoo.com